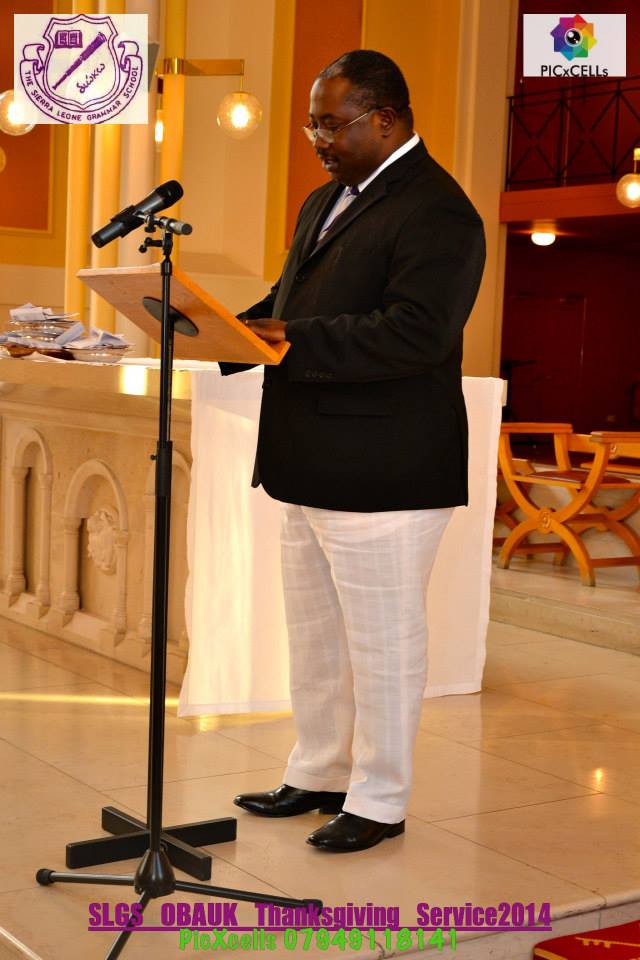 It was back in 1976 that it all happened; my long-awaited dream had come to reality I am leaving Christ Church Primary School for the Grammar School. At the selective entrance exams in that year, I was the only student to leave CC school for the Grammar school. I can recall attending the registration process at the new school with my late father. As we walked along the 2nd corridor, I heard some solid flogging. A young boy was been taught the lessons of discipline. I held my father’s hand very firmly and said’’ daddy nar so den dae beat nar dis school’’ and my father being the colonial master he was, said to me’’ u go no you sura’’

On the first day of school, escorted by my older brother the well-known Harold Findlay alias Fillo Joe, we arrived at school and immediately I was left to find things out for myself. I saw lots of boys in the lobby looking at the information boards and I was quick to realise that they were looking to see what forms they have been put into. I was put in form 1b with Eddie Asgill as my form teacher. After assembly, I walked to my classroom and already my name had been assigned to a desk in row 1 which is the row in front of the teacher’s desk. I was halfway down the row which meant that I was the fourth boy from the teacher. Our form master walked around the class after introducing himself talking to each student and asking what school we had come from. I remember when he got to my desk, he looked at me and said another Findlay I thought we have had enough of Harold. In those days, the education system in Sierra Leone was particularly good. We had exercise books for each subject. Green was for General Science, orange was for French, purple for Geography, brown for maths and so on. Eddie Asgill taught us both English Language and English Literature. It was from those formative years that I began to develop a keen interest in E. Literature. Our textbook was the calabash of Osman the Wise and it was from that book that Pa Musa one of the cleaners in the school got his name Bako the stranger. In form 1, we did eleven subjects, and my favorites were History, BK, Latin, French, E. Language and Literature. Madam Smythe taught us French and was not only my favorite teacher but was also well liked by lots of other boys. Bra Wise who taught us Music introduced himself as the SCORPION because he stings people. The teachers were all different some were friendly but others very firm. One incident I remembered during a French class was when Madam Smythe took us out to sit under the shades of an almond tree what we then called wait man banga. As she read from France afrique, Farid Basma a very troublesome boy (narrate the story with Egerton Wilson) My classmates to name a few were Leslie Taylor, Emmanuel Olu-Jones, Milton Campbell, Desmond Jones, Eugene Jones, Mawan Basma, Toufic Hassan, Gerald Cole, Clifford Fewry, Winston Silver, Osmond Boston, Bismarck Williams, Soneye Lisk and many others. During my first Penny Day, I was not caned nor threatened by any senior boy because no one would dare lay hands on Fillo’s brother.

I was in form 2 when I had my first experience of walking home from school which I must say was a good trek from Murray Town to Charles Street. Grammar School boys had a reputation as troublemakers and when the poda poda drivers decided not to take any GSB, or the Murray Town bus is forced into Congo Cross Police Station we were in great difficulty.

My academic performance in E. Language, E. Literature, Latin, History, BK and later Government were reasonably good. I had to do well in school both in my schoolwork and behavior. It was a regular statement from Pa Spaine whenever he met up with me’’ Findlay look at your father’s position in the school’’ Pa Spaine had his team of teachers whom he would sum up when he was ready to administer justice. Everyone would receive 4 or 6 strokes, but Findlay would always receive 9. I was ever so delighted when my father stepped down as President of the Old Boys Union. As stated once by our Grand Chief Patron, the GS prepared him for a career in the military. Some teachers do have the foresight and another of my favorite teacher was Mrs. Palmer who saw the potential in me to becoming a Legal practitioner. She gave me the part of a Lawyer during a performance put up by the drama club at one of our speech day and prize giving ceremony. I was touched when I came to England after all those years and found myself enrolled at the prestigious Holborn School of Law. This confirms the Krio proverb’’ da mammy wae sidom, e dae see far pass da pikin wae tinap’’

Many of the things I learnt at school I still remember. E.g., the mathematical theorems put into music by Vava George. The area of a triangle is L x B x H, but the area of a rectangle is ½ base x H. Poems like the Village School Master, Okonkwo, Things fall apart, The Trojan war, The Merchant of Venice, Weep not child and The Drummer Boy.

I have always been physically fit, and I participated in many games and sports. A member of Quintus House, I represented my House and School at many athletics meetings. I used to be in the 4 x 100 relay team and the tug of war. Talking of Tug of War, I remember a good friend of mine Ibrahim Conteh alias ‘’wata rough’’ My archrival on the tracks was Lancelot Edmondson and in our days at school, athletics and other sporting events were very enjoyable. I played table tennis and I was the first day schoolboy to lead the school band. Something I enjoy doing to this day. I made a good number of friend’s boys like Frank Hume-Dawson, Edmund Thomas, Reginald Cole, Clifford Fewry, Claudius During, Osman Kargbo, Desmond Boston, Ekoh Nelson, Gerald Cole, Etop Antia, Layard Pabs-Gannon,  Farid Basma, Donald Bell, Soneye Lisk, Victor Forster, Aubree Johnson, George Logan, Donald Macauley and quite a few others.

I always tell people that to say you are a Regentonian you must have gone through certain rituals in order to qualify for that title.

1, you must know where library is located. The official or unofficial library
2, you must have eaten wait man banga.
3, you must be known to Ur Sue down the village
4, you must have had a good amount of cushument. Ladies and Gentlemen, I
would refrain from letting you know the effects cushument had on GS boys.
5, you must have a false name.

I am tempted to skip this section but as a true Regentonian I will continue. My false name was ‘’cowfoot’’ and that was because of the strength I used to play football. Goal keepers would refuse to keep the goal if I were in the opposite team. My good friend Lancelot Edmondson looked at me once after a football match and with his light stammer said to me’’bo Findlay nar baboo bone den take wass u’’Talking about being physically fit, during my recent visit to Freetown. To refresh my memory of my school days, I walked through Aberdeen Road, along Macauley street and on to Congo cross. As I approached Murray town junction where the Ocada’s settle down for a break, one of them greeted me and said, ‘’ yeh bra, dis nar den US marine, u kin see sae de bra fit ‘Thank God I quickly inherited the name Fillo Joe after my brother as many guys were frightened to call me cowfoot. False names were part of the tradition of the GS and if one were to become upset, one would only end becoming frustrated. To name a few we had, water rough, K. Doe, most, early man, Mugabe, wardrobe, matoma, dumbeh and bizzy.

It would not be just to deliver this reminiscence without paying tribute to friends who today are no longer with us. As the hymn writers puts it’ ’the friends that started off with me had entered long ago. Ah one by one they left me to struggle   with the foe; Their pilgrimage was shorter, their triumph sooner won; How lovingly they will hail me, when my work too is done. John Barleycorn, Julius Max-Peters, Ekoh Nelson, Philip Valcarcel, Kenneth McHenry, Raymond Beresford –Cole, Mohammed Jalloh and Douglas Orielly.

The GS taught me a lot of life’s lessons which from time to time I had encountered.  Thank God for master’s like Pa Spaine. May he continue to have eternal rest. Pa Spaine would tell us that life does not begin at the GS but when you go out into the world that is where life begins. Furthermore, failure is the beginning of true success. It was humiliating to repeat a form when some boys went through school at lightning speed. Today I see and sometimes meet some of these schoolmates and I ask the question, how did the cookie crumble? This brings me to one of life’s true statements, ‘despise not the day of small things’’ It was at the GS that I learnt that the road to success is not straight; there is a curve called failure, a loop called confusion, speed bumps called friends, caution lights called family but if you have a spare called determination, an engine called perseverance, insurance called faith and a driver called God, you will make it to a place called success. Today, I am immensely proud to say that Regentonians have a lot of respect for me. At this point, I would like to read a letter from the Principal, Mr. Lasite handed to me during my recent visit to the school when I took part at a presentation ceremony. It is my ambition to continue to support the good old school in whatever way that I could following on in my late father’s footsteps

In my conclusion, I would like to refer to another of my favorite sonnet from Shakespeare’s, As you like it.

THE SPIRIT OF MY FATHER DWELLS STRONGLY IN ME, AND I WILL ALWAYS ENDURE IT, THOUGH YET I KNOW NO WISE REMEDY OF HOW TO AVOID IT
.